It's official - Alan #Turing is pardoned!!!

Great news to almost end the year on. Here's the official press release announcing a pardon for Alan Turing under the Royal Prerogative of Mercy, which came into effect today.

Second World War code-breaker Alan Turing has been given a posthumous
royal pardon for a 61-year-old conviction for homosexual activity. Dr
Turing, who was pivotal in breaking the Enigma code, arguably shortening
the Second World War by at least two years, was chemically castrated
following his conviction in 1952.

His conviction for "gross indecency" led to the removal of his security
clearance and meant he was no longer able to work for Government
Communications Headquarters (GCHQ) where he had continued to work
following service at Bletchley Park during the war.

Dr Turing, who died aged 41 in 1954 and is often described as the father
of modern computing, has been granted a pardon under the Royal Prerogative
of Mercy by the Queen following a request from Justice Secretary Chris
Grayling. "Dr Alan Turing was an exceptional man with a brilliant mind,"
Mr Grayling said.

"His brilliance was put into practice at Bletchley Park during the Second
World War where he was pivotal to breaking the Enigma code, helping to end
the war and save thousands of lives.

"His later life was overshadowed by his conviction for homosexual
activity, a sentence we would now consider unjust and discriminatory and
which has now been repealed.

"Dr Turing deserves to be remembered and recognised for his fantastic
contribution to the war effort and his legacy to science. A pardon from
the Queen is a fitting tribute to an exceptional man."

Dr Turing died of cyanide poisoning and an inquest recorded a verdict of
suicide, although his mother and others maintained his death was
accidental.

There has been a long campaign to clear the mathematician's name,
including a well-supported e- petition and private member's bill, along
with support from leading scientists such as Sir Stephen Hawking.

A pardon is only normally granted when the person is innocent of the
offence and where a request has been made by someone with a vested
interest such as a family member. But on this occasion a pardon has been
issued without either requirement being met.

In September 2009, then-prime minister Gordon Brown apologised to Dr
Turing for prosecuting him as a homosexual after a petition calling for
such a move.

An e-petiton - titled "Grant a pardon to Alan Turing" - received 37,404
signatures when it closed in November last year. The request was declined
by Lord McNally on the grounds that Dr Turing was properly convicted of

what at the time was a criminal offence. 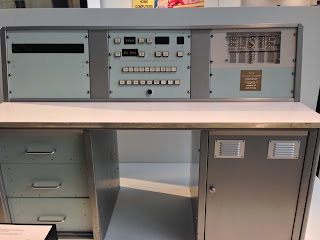 Last week I was in Dunedin and visited the Otago Settlers Museum. Hidden amongst exhibits about Dunedin's pioneer settlers, at the farthest reaches of the museum, behind the old motor vehicles was a collection of computers, including the rare ELSIE computer, which used to be used for drawing Bonus Bond winners. You never know what you'll find in a museum.

Welcome to the CS Blog that aims to improve the public understanding of computer science. Please visit the School of Computer Science for information about our courses and our research.
This blog is managed by Ian Watson.