As the evening draw in it's once again time for the annual series of Gibbons Lectures at the University of Auckland. Each year the four weekly lectures follow a theme; this year's is titled: The artificial human body - by computer design, exploring how computers are being used to model various aspects of the human body, from our genome to medical imaging. The first lecture on Computational Physiology is by Distinguished Professor Peter Hunter, the Director of Auckland Bioengineering Institute on Thursday 5th of May at 6:30pm in the Owen G Glenn Building room 260.092 (OGGB3) on Level 0. Further information about all the lectures can be found here.

Over in Sydney, the Museum of Contemporary Art has on show an exhibition of the work of Grayson Perry. Perry is a very modern artist who works in a wide variety of media, including painting and ceramics, poking fun at the shallowness of modern culture. He has also revived the medieval art of wall-hanging tapestry, producing some extremely large and colourfully wry works. It is not surprising that he even applies his social commentary to social media. One work, partly a parody of Van-Eyck and the annunciation images of the middle ages,  "The Annunciation of the Virgin Deal", revolves around our infatuation with mega business deals and the latest technology. Notice the iPhone, the iPad, and the twin portraits of Steve Jobs and Bill Gates hanging on the wall. There is much more in the show – it is worth a visit if you are passing by.
[This post was written by my colleague Bob Doran] 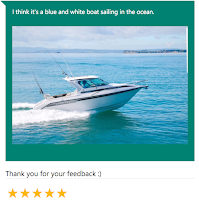 Microsoft's AI recently got all the wrong publicity when a chat-bot, called Tay, quickly learnt via Twitter to become a racist. Hopefully less contentious will be CaptionBot, which can recognise and describe the content of photos yo u upload to it. To the right you can see that it correctly identifies a photo of a boat I uploaded. Give it a try. You can find out how CaptionBot works here.

My colleague, Bob Doran, brought this to my attention and he writes: Recently, a video appeared on Youtube purporting to show a Facit electro-mechanical calculator deriving pi.  In fact, the calculator is merely dividing 126358 by 40221. This gives a good approximation to pi. 126358/40221 = 3.14159270, whereas pi is 3.14159265. However, the video does give a neat demonstration of an algorithm called "non-restoring division".

Calculators are really just simple adders that add two numbers in one revolution of the mechanism. These adders can also subtract if rotated the other way. Calculators may perform other simple actions such shifting numbers to the left or right, entering data, clearing registers and counting up or down. But to perform division (or multiplication) any simple calculator has to follow a program of many steps – a mechanical program, but a program none-the-less.
Consider how the few of us who can still do division with pencil and paper go about it. We would look at the dividend 126358 and the divisor 40221 and use our memorized "gzinta" tables to guess the first digit of the quotient i.e. "4 goes into 12" 3 times. We then form 3 x 40221 = 120663 and, as that is less than 126358, subtract it, then "take a step to the right" and continue. Most modern computers divide in much the same way, having a built-in "quotient digit predictor". However, older computers, didn't have such intelligence – they needed to subtract to even compare two numbers, unlike ourselves who can just see with one glance that 120663 is less that 126358. Older computers and calculators had to work out the next quotient digit by subtracting the divisor again and again from the dividend, keeping count, until the result of a subtraction became negative, showing it had gone too far and thus needing to restore the dividend by adding the divisor once (and reducing the count by 1 to give the correct quotient digit.)
This is where non-restoring division comes in. When the result of a subtraction becomes negative it means that we have subtracted the divisor an extra one time at this quotient digit place. This is the same as having subtracted an extra ten times one place to the right. So, rather than adding to restore immediately, the program says to move to the right and then continue by adding the divisor (and counting down) rather than subtracting. When the dividend becomes positive we have found the next quotient digit, so can move to the right again and subtract the divisor repeatedly – and so on.
Look at the video again and now notice that the direction of rotation changes for each quotient digit produced. Clever, eh?

What is computer science?

What is computer science? This is a question I often get asked, or variants like, "what do computer scientists do?" Sometimes I struggle to find a simple answer. This doco from the BBC: The Secret Rules of Modern Living: Algorithms does an excellent job of explaining, at least one core aspect, of what is computer science; namely, algorithms. It also shows how essential algorithms are to modern life. This excellent doco is currently available on YouTube.


from The Universal Machine http://universal-machine.blogspot.com/

D-Wave, the quantum computer company, has announced it's latest quantum computer the D-Wave 2X. "With 1000+ qubits... the D-Wave 2X will enable customers to run much larger, more complex problems on the system. In addition to scaling beyond 1000 qubits, the new system incorporates other major technological and scientific advancements. These include an operating temperature below 15 millikelvin, near absolute zero and 180 times colder than interstellar space. With over 128,000 Josephson tunnel junctions, the new processors are believed to be the most complex superconductor integrated circuits ever successfully used in production systems." Quantum computers are set to become mainstream, perhaps. Read more about the D-Wave 2X here.

Welcome to the CS Blog that aims to improve the public understanding of computer science. Please visit the Department of Computer Science for information about our courses and our research.
This blog is managed by Ian Watson.